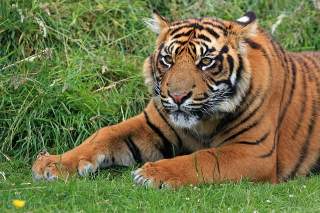 The tiger (Panthera tigris) is a large feline beast living in Asia. Of the current cats, the largest and the distinctive dark stripes of golden-yellow or reddish-brown coat are unmistakable. We distinguish between eight and nine subspecies. Of those that were not extinct, there is the biggest difference between a small, very contrastingly tattered Sumatra and a large, lighter Sassurian tiger. Sumatran tiger has a torso length of 140 cm, tail length around 60 cm with weight from 120 kg in male and 90 kg in female. The Sassurian and Indian Tigers, on the other hand, commonly reach the length of the hull over 2 m, the length of the tail is up to 90 cm and the weight of the males often more than 200 kg; females are significantly smaller, reaching weights around 130 kg. Thanks to these parameters, the tiger is the third largest terrestrial predator after the polar bear and the brown bear. As common subspecies standing between the two above-mentioned extremes we can label the Chinese tiger and Indian tiger. The smallest subspecies were the already extinct Balinese tiger.

do not disturb, sleep!

18.3. she sleeps again, this time is stretched both long and wide.

today is a complete procession of people and a minibus, so it cancels me

16.2. just packs telling where she is sleeping today

8.2. sleeping cat again, not even visible among the trees

6.2. sleeping in the house, the nurse in the shorts is cleaning the dining table yet!

He had something to do before he let go of it!

22.1. Whatever happens, I will not disturb my sleep