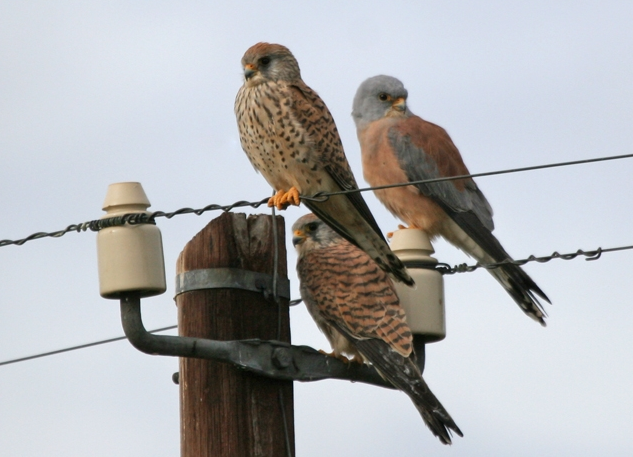 The nesting site is located in the Cabañeros National Park

Cabañeros National Park is a Spanish national park in the central part of the country, in the Castile-La Mancha region. It lies approximately 60 km south of Toledo, in the Montes de Toledo (highest point of 1 448 m) in the Sierra del Chorito area. The aim of the park is to preserve the original Mediterranean forest with a number of rare species of plants and animals. The park has an area of ​​409 km² and was established in 1995.
The South Pox is very similar to the common kestrel, it differs in voice, shorter wings, shorter tail and light claws. The male has a dark spine without a dark spot, a bluish winged field, a blue head with gray faces (no beard), a downy spot on the lower and smaller. The bottom of the wings is light with dark toes. The female is very difficult to distinguish from female kestrel. It nests in colonies in towns, on cliffs, ruins, etc. In the Czech Republic it was nesting before the Second World War, since then it has only rarely been flying.

Eagle Owl - webcam from the nest in Germany

19.6 Camera 2 does not work, there is a shot of another nest on camera 1, a female with a red 78V ring can be seen there

1.6 The camera is moving again, three cubs are born

21.5 Kestrel is also a transmission failure, so today it is a disaster, many cameras do not work

Hello Petro,
thanks a lot for the addresses of the kestrel, I have already saved them, there will be cubs again, I'm also looking forward to the golden eagle, their little ones, but we'll wait a while, I always have more addresses from your discussion, thanks

Hello Dasha, it's okay. This week, the young eagles in Estonia will hatch on nest 2
https://www.zoocam.info/orlovec-ricni-webkamera-z-hnizda/

1.5 Kestrel has the first egg!

The 2 camera also goes, it just has to switch on 1 camera and can't go back in the timeline. Unfortunately, it is not yet possible to insert.

Thank you Peter, I missed this possibility

1.5. Either 13.01 has either forgotten somewhere, or the cuckoo has used her absence. Birds are color blind, so one more neck may not mind.

10: 26 on the nest, she was there often yesterday, so maybe we'll get eggs here.

The camera from the nest no longer needs to switch, it is added separately

19.2. super, added another camera to see them in the nest, thanks

The camera inside the nest is frozen, they have not got it. And it can not be added separately, it must be switched.

I do not know Jaru, it's been a new transmission since yesterday, but the shot in the nest was not what I know. But when the eggs are, then perhaps they will show us the inside of the nest.