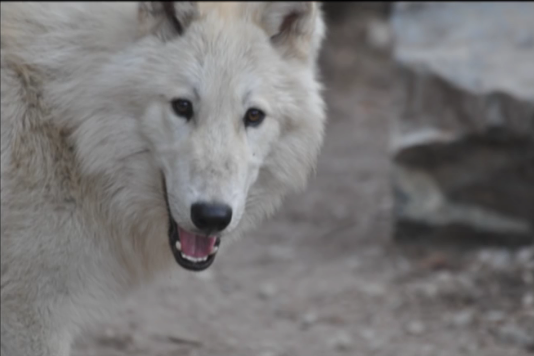 This camera overlooks a pack of wolves living at the International Wolf Center in northern Minnesota. Four wolves move in front of the camera: Axel, Grayson, Denali and Bolz. From the north side of the wolf area, you can watch the wolves interact, eat and travel across 1,25 acres, which includes two dens, a filtered pond and a wooded area. Even in captivity, wolves can be elusive, so if you don't see them right away, take a close look at the background under the trees. Your patience will be rewarded.
Two wolves are from Arctic subspecies: Axel and Grayson. They are white and are 4 years old.
Boltz is brownish-white and represents subspecies of Great Plains. He is 8 years old.
Denali is a representative of the subspecies Rocky Mountain. He is gray and white and is 12 years old.

The wolf is the largest representative of canines, weighing 35 to 52 kg. It is 150 to 190 cm long and 65 to 80 cm high. Females are smaller - they weigh about 25% less than males. There are large differences in weight and size between different subspecies of wolf. For example, the red wolf (Canis Rufus) living in the lower Mississippi can weigh only 15 kg. The size of wolves is also affected by latitude - the further north they live, the larger they are (Bergmann's rule). The only exception to this rule is the Arctic wolf (Canis Lupus Arctos) which, despite living further north, is smaller than wolves living in northern Canada and Alaska. Size is also affected by the abundance of prey in the area where they live. Logically, the more prey, the bigger the wolves will grow. The wolf reaches the full size at the age of about 1 year.

When a wolf dares to defeat a "alpha wolf" on a male, the alpha becomes a loner and the wolf becomes an alpha wolf. The defeated wolf becomes a "loner" wolf and lives alone. Exceptionally, it happens that the wolf is accepted by another pack.

Thank you to webcam operators:
https://wolf.org/wolf

6.2. 13,57 warheads and black ravens (30) as well. The wolves do not notice them even when they climb before the nose and the ravens are fighting with each other

Thanks to Petro, there's plenty of meat there, but they're probably overwhelmed in 15,00 that they're interested and preferring

Thanks for the alert, the 1 camera has been fixed. Unfortunately, 2 does not work on the line itself, it has to switch to 1.

14.1. it is snowing again and everything is set in the snow

7.1. when attending the nurses, the whole pack is together.

4.1. wolves are resting somewhere, ravens have a feast

3.1. 13,22 after a long time the pack of all five wolves is together, resting after a good meal, the sun shines even when the temperature is not too much.

27.12. morning feeds are hiding wherever they can, but they mostly leave it tossed everywhere.

The wolves also have a lot of snow

20.12. the wolves are already fed and the bird feasts begin.

That the ravens just let the wolves let down? Apparently they have enough food and it does not make any sense.