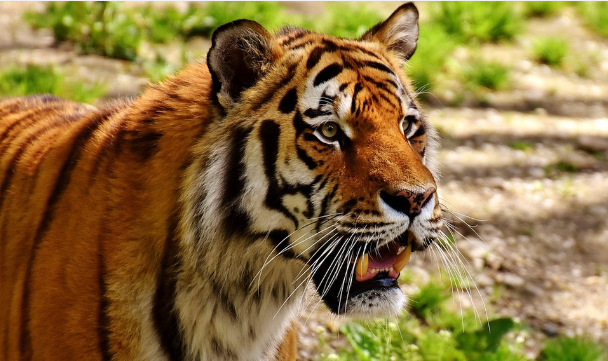 1 and 2 Zoo Topeka, Kansas
The young were born on Monday, 15. October - 3 males and one female

Camera 3 - Jacksonville Zoo
The youngsters of the critically endangered Sumatran tiger were born 20. November in the Jacksonville Zoo.
It is the second litter of six-year-old Dorcas and a 16-year-old male Berani.
The young are males and they are named Rocky and Jaggar.

The Sumatran tiger is the smallest, most endangered and the only tiger whose population is limited to a single island. Unfortunately, the Sumatra Tiger is critically endangered and only three strong populations remain in the protected forests on Sumatra Island in Indonesia.
One of these populations is in the Bukit Barisan Selatan National Park, where the Zoo and Gardens in Jacksonville partner with the Rhino International Foundation to protect their habitat. A four- to six-member team of rangers travels through the forest, mostly on foot, on multi-day patrols that remove traps and traps, and arrests poachers trying to capture tigers and their prey.

they are gorgeous - I haven't been here long and are healthy

19.2. 2019 Shed (originally around the birth box) is gone! The Tigrats are extremely nervous, but I lie together. Mama Jingga stands out in a neighboring cage on the exquisite "bunk".

They also often fight with mom, even having the opportunity to climb where they can not

Video from the Topeka Zoo: https://www.facebook.com/TopekaZoo/videos/1079100348958670/ - record live streams from 8.1.2019 - as expected, regular tiger cubs weighing ends - from cute kittens become beasts and their playing becomes dangerous . Nurses will no longer go to the cage with tigers and end up with favorite battles with a brush or a game of "eating a shoe, camera, weight". He looks at it nicely, but it hurts. In the video, ladies answer various questions about the life of the tigers (soon the young will go into the outdoor enclosure and install another camera), about their breeding and prospects for the future. Meanwhile, the Tigers demonstrate their cuteness, fervor, speed and graceful sophistication.... read more

Tigers got access to the adjacent cage where they had a bunch of shavings and some other toys, and they were enjoying everything. Tired Mom Jingga slides on the roof of the hut, where the chicks do not come back. Yesterday (7.1.2019) weighing tigers: Badar 10.45 kg, Raja 10.75 kg, Bintang 9.55 kg, Zayana 9.15 kg. Weighing: grab the tiger behind the neck to keep it from cracking too much, stuff it in the weighing box and prevent it from escaping and cutting the box in the teeth, quickly subtract the weight, empty the contents of the crate into the adjacent cage and quickly close the door, catch another tiger ... Breeders are committed to weigh tigers up to 30... read more

Thanks for the information

they're beautiful, they're growing out of water, and mom's got a bit of calm-she's got to hide from these little "hobbles," haha

30.11. Mother was very hungry, still running around the cage. Only in 22.17 of our time did she come and go to the bastion. Nursing staff and six visitors came to the cage. Each kitten was first weighed individually and then introduced. After 10 minutes, visitors left, and one kitten in his arms could be shown to other people. After the cage, there were various delicacies, which was minced meat and the camera showed what it is and also the weight of kittens. Most weigh Raja 6,25, two kittens weigh as much as 5,45. Everything ended in 23,00 and was immediately released to my mom. She first started searching... read more

16: 01 Jingga dragged the young man out of the roof of the shed down, so it's still what they are watching - the tigers crawl around the cage. Vecerni vazeni (if any) will be the most successful cowboy associated with the hunting of unrelated individuals. If, however, you send Jinggu to dinner, without some youngster slipping through it.
BTW, a nice video from Topeka Zoo presents individual young people and interesting information from their lives:
https://www.facebook.com/TopekaZoo/videos/519385278543615/
Warnings: More than a cuteness of cuteness.

Tigers Report: Mama Jingga took the young man to the roof of the hut, where the camera did not look much, it was only occasionally to see that something was going on. From here, the youngsters can not get down there themselves. The only one who tried it was Badar - he jumped off, but Jingga soon grabbed the lime and carried it back up. The weekly ritual of the evening's bondage (around 22h our time) is still long-lasting - the main caregiver Kristin is about the tiger old-timer with a tilt that I sometimes tighten my tigress, as I am drunk, for example, with a tattered pack with outstretched drapes. The worst happens when people are busy and they are not allowed to be tigers... read more

Thanks for the message.

Nobody, 3 already has a name. It's called Bintang, an Indonesian name that means a star!

There is a nice daily ritual in the tiger department in Topeka Zoo - weighing the cubs. Everyday at approx 10p.m. CET: Tiger Mum Jingga is released from the cage to the other part of their apartment (probably for meal) and breeders enter the cage (usually 3 girls with some guests including ZOO director). One of them finds cubs one by one in their day (the last days they were on the top of the day), the second breeder weighs the cubs, writes the records, and the third takes pictures. The weight values ​​are written on the white... read more

We are on the Czech server, please continue with the translation. Here's the translation: The Daily Ritual in the Tiger Department at the Topeka Zoo - Weighing the Cubs. Every day around 10: 00. CET: Tiger Ming Jingga is released from the cage to another part of their enclosure (probably for food) and breeders enter the cage (usually 3 girls and some guests including the ZOO Director). One of them picks up the chicks, the other breeder is weighing them, writes the records, and shoots the third one. Weight values ​​are written on a white board and displayed online at the camera. Dear (19.11.): Badar 4.85, Raja 4.8, Young 3 (not named) 4.3, Zayana 4.5 (values ​​listed in... read more

The first born baby has a name !! Meet Badar!

she is amazing, patient and dedicated, even at the expense of her own comfort !!!

Are you watching tigers? The female is a super mom, so she is beautiful about her

I like to watch them, my mother is really amazing. When I see how tender it is to the young, I forget that it is a predatory animal

1 and 2 are Topeka Zoo, Kansas

2 new cameras from Topeka Zoo in Kansas. 4 Sumatra tiger chicks were born on Monday, 15. October. 3 males and one female 🙂