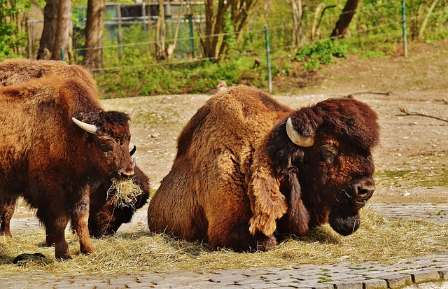 The camera is located in Browsk, where about 500 pieces of dentures live. Total 1250 teeth live in Poland.

The Zubr is of the Tuuro family. Together with the American bison, the only two living species are bison, but the zuber is smaller than the bison. The male weighs 530-920 kg, the female is almost a half smaller, weighs 320-540 kg. Zubr is the largest wild ruminant in Europe. With the expansion of civilization on the European continent, the process of extinction of the teeth began. In northeast France in the Ardennes and Voges they survived to 14. century. In Brandenburg, dentists were in 16. st. captured and kept in the fields. They have survived for a long time in East Prussia, mainly because of the protective efforts of Emperor Wilhelm IV in these times, to protect the ban on hunting and the winter feeding. In 16. century dentists began to die in Hungary, the animals survived for quite a long time in Transylvania in present-day Romania. In the Roden Mountains, the last tooth was caught by X.NUMX, thus destroying the Carpathian teeth. Beginning with 1762. century wild dung proved to be only in the Bialowieza forests in today's Poland and Belarus and the Caucasus. In 19, 1918 was the last 68 of the teeth, probably 1919 was killed last. In the Caucasus, the last shot was shot by 1927.
At a time when the dentists were exterminated in the wild, fortunately, several animals were caught in captivity, particularly in private breeding in England, Germany, Poland and Sweden. On 25.- 26. In August, 1923 was founded in Berlin by the International Society for Dental Rescue. She gathered information about the last 54 individuals (some sources reported by 56 individuals) who were then in captivity. However, a number of animals were unable to breed. The basis of the lowland line was just seven animals, the basis of the Lowland-Caucasus line, then twelve animals.

The European Zubr was one of the largest living animals that lived in the Czech Republic. He died in the middle of 18. century. Their names in the territory of Bohemia and Moravia still refer to local names, such as Zubří, Zubrnice, Zubřina, Zubřinka or coats of arms of some aristocratic families. Zubry breeds a number of domestic zoos, the first purebred dentists appeared in 50. years 20. century v Prague ZOO.

Thanks to camera operators:
https://www.lasy.gov.pl/pl/informacje/kampanie_i_akcje/zubryonline?fbclid=IwAR2OTDnc4ncx0dzIigLaTZmrCefQ7Xy4Bd_dE7BC6oBSMndGY77OmBlDUBc

18.11 Today they launched the camera on YT, but unfortunately they have blocked settings. So here is at least a link: https://www.youtube.com/watch?v=9ZHUcUaxhzw

5.12 - 9:05 foresters bring a new trough for feeding carved out of a tree and new feeding. As soon as they left, a large herd of bison, including calves, arrived.

13.5. The camera from the bison feeding ground is online again, but only on the official website, there is no one on YT yet… link here: http://www.lasy.gov.pl/pl/informacje/kampanie_i_akcje/zubryonline

14: The 00 forester brought the tooth feed

Nice day to Poland from the Czech Republic. Today we are very snowy here in Moravia.

21: 50 large herd of dentures on the pasture

The dentures are snowing and still falling

17: 14 large herd of dentures on the pasture