A documentary film about a gridded lattice 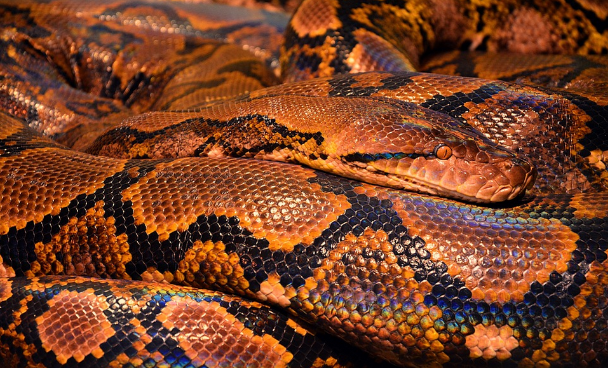 The edge of the grid is a serpent from the family of the pygmy.
The Slatted Gulf occupies southeast Asia, Indonesia and the Philippines. It prefers waterfalls and coastal forest stands, wetlands, swamps and rice fields. He climbs well on the trees and likes to bathe, often stood in the water for hours. Her predators are predominantly small mammals, birds, or reptiles, and often near the human dwelling, they often catch a hen or a smaller piglet. Large individuals even dare to wildlife, buffalo calves, antelope, deer, and even humans (but these are very rare cases of "self-defense" type, usually a man is afraid and avoids him).
Krajta is a snake growing normally in the length of 5-6 meters, the longest measured and properly documented individual from the Pittsburgh Zoo had an 8,7 meter. In recent years, however, this record has been questioned, and the Guinness Book of Records lists as the longest captive a snake named Medusa of Missouri with the length 7,67 m. As with other snakes, there are color differences. Often, it is yellowish or brownish on top with large, yellowish (approximately diamond) spots with a dark border, giving this group a generic name.
Mating occurs in October to November. After 3-4 months of pregnancy, females tolerate females around 50 eggs, but exceptionally they can be up to 100. She is a caring mother, she enmeshes her warmth, heats and protects her massive, muscular body. Incubation times, as with most reptiles, are temperature dependent and move between 54-105 days. Excited youngsters measure about 50 cm and can immediately take care of themselves.
The only dangerous enemy for an adult snake is man. The lands become victims of the demand for their beautifully patterned skin, and in their homeland they are ruthlessly persecuted and hunted. For local residents, they also welcome a varied diet, and some internal organs also use traditional medicine.

The Secret of the Rainforest Documentary