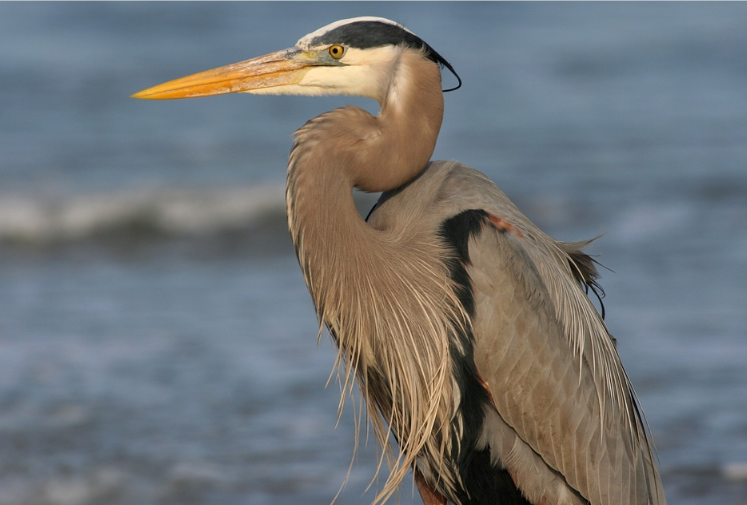 Great egret is a large wading bird of the heron family.
It is the largest North American heron. It grows 91 - 140 cm, measures 167 - 201 cm in the wingspan and weighs between 2 - 3,6 kg. It is colored blue-gray, with black squadrons, a rusty gray neck, an orange shoulder spot and identically colored feathers on the thighs. The beak is light yellow, orange during the breeding season. Elongated dark feathers on her head also grow in her wedding dress.
It occupies almost the whole of North America, including Alaska, British Columbia, Ontario and Quebec. Despite Florida, Mexico and the Caribbean, it also partially extends to South America. Birds from northern populations are migratory and migrate to the middle of North America for the winter. It occurs in swamps, flooded meadows, lakes, ponds, slowly flowing rivers and seas. It has also been recorded several times in England, Greenland, Hawaii and the Azores.
The Great Heron feeds mainly on small fish, but it also eats crabs, insects, small mammals, amphibians, reptiles and small birds. He hunts lonely and the prey most often attacks his long sharp beak. The branch nests on the trees. In one snack, 3-6 is a light blue egg that sits approximately 28 days.

19.4. and three necks are already being fed, the largest one is already directing the smaller one, who is to receive the largest portion

21.2 Transfer again online, herons are not on the nesting site yet

19.6. but we are still feeding, we are beautiful

Herons begin to nest in Maryland

The young herons are already big

19: 15 you have to see it! The female shields the young, Betmen in the gray

28.4. three scallops with an egg and they are already pissing

Three shakers and one egg

We already have two shots!

Jar, here the egg has taken the egret before 10 days, PIP is not here yet, the incubation is 25-29 days.

6.4. today there is a lot of fun, the female man is nesting, the four eggs in the nest hold.

Maryland is a terrible wind today

There are three eggs in one horse

The shots are on several nests, just looking at one where 2 eggs are already, time is not visible.

29.3. here they are also sitting on the nest

A new transmission from nesting of big birds in Maryland!