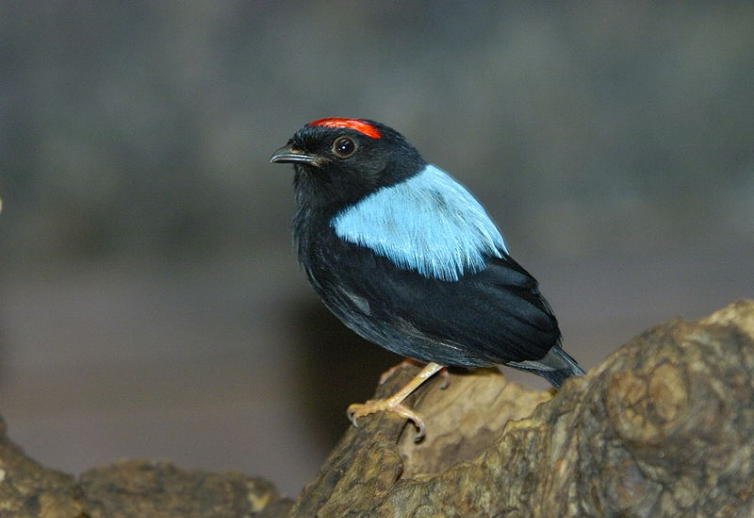 Deep in the tropical dry woods of Isla Boca Brava in Panama,
is a camera that focuses on a lone twig,
where dramatic dances of male pipelines take place.
This is one of the many great concentrations where males attract females to mating.
The females adhere to the twig and choose a suitable partner.

Males of the genus Lance-tailed form long-term - male alliances. The partners sit side by side in tall trees to sing duet songs. As the female approaches, she dances sideways on a twig
with coordinated jumps and butterfly flights. The performance that occurred just prior to copulation is often performed only by an alpha males, but if both males are present, the male beta typically leaves the area a few minutes before the final stages of mating and mating.
The most charming performance is the "reverse jump", in which two males alternately jump over each other, while the female observes everything in close proximity. Tremors of surprising images often end in a sharp "eek" of the alpha male; one performance can involve many bouts of jump and flight.

Camera again online, I haven't seen the dance yet

7: 48 dance, after a while the female arrives

thanks to Petro, I've been lucky to see them for a long time!

Other performances from 17,06 and standing, not only dancing but also fighting

Thanks for warning yar, that's fofr.

It's also interesting how people came to this place and that they like it right there.

Thank you very much, these are beautiful birds and these dances are also great

1.3. 13,44 has yet to be seen in the previous record. Thanks to Petro, maybe we'll see the interesting ritual.