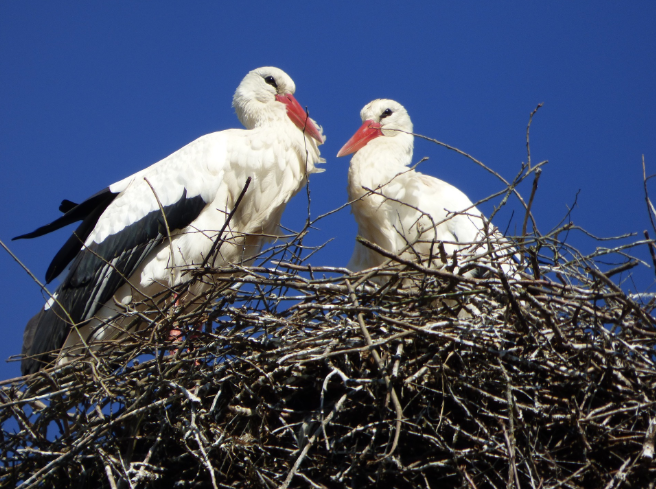 White stork is a large species of wading bird of the storks family.
Big, long neck and long legs. The body length is 95-110 cm and 180-218 cm wingspan, the male is slightly larger than the female. The weight is in the range of 2,3-4,4 kg. White color is predominant in color, squadrons are black, beak and legs red. Both sexes are colored the same way, the young bird has a darker red beak with a dark tip. In flight, unlike turtles and pelicans, the neck is stretched out.
They nest individually or in open colonies in an open farmland with access to swampy river banks, wetlands
and flooded areas. At the end of March or at the beginning of April, the male is usually the first to arrive in the nesting place, which occupies the nest of the last year and defends it against the other males.
After the arrival of the females, the two birds are loudly clapping his beak.

26.5.20 - only three heads are visible during feeding, the young probably died and it seems to me that another young is not breathing bad

22.5. feeding dragons and lady with veil and baby

5.4. Afternoon in the nest couple, hardworking.

It was probably a traveler who had just stopped to rest in the nest.

I just wanted to write 🙂