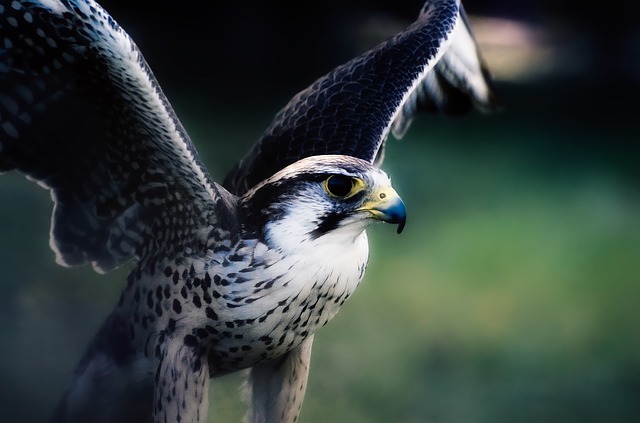 The nest is located in the French town of Illkirch-Graffenstaden at St. The bell tower symphony, the city and the LPO installed the nesting box on September 19, 2015.

The aim of this project is not to replace natural habitats or to attract these birds of prey in order to limit the overgrowth of pigeons, but to allow the birds present to choose the area to breed under the best conditions.
No human intervention is made except for the initial installation of the nest box and its annual cleaning (with the kind support of the Les Mousquifs Climbing Club).
The peregrine falcon almost disappeared in the 70s due to pesticides. This species has been saved by a ban on DDT since the 80s and a ban on other organochlorine pesticides. Monitoring and protection of nesting areas by engaged ornithologists also contributed. Alsace currently has around 50 to 60 pairs.
After the male (Flash) disappeared at the end of February 2018, a new male (Flashblack) appeared that nested with the female Valentine.

Thank you to webcam operators:
Nest 3

30.4. the pigeon goes there regularly every day, on the other camera the female bastion

28.4. So one more camera - nest 2, the chicks should hatch there around May 5th. The first female laid 1 egg, then there was a fight for the nest and the second female killed the first, which then laid another 2 eggs.
https://loire.lpo.fr/2021/02/10/faucon-pelerin-camera-direct-a-saint-chamond/

16.4. The 12,33 snarling turtle kept company until 15,06, the female woke up in a voice welcoming the exchange so she could run away

Spring, it wasn't a turtle dove, but a wood pigeon. He sits on the landing every day, yesterday he was there with his female.

Thank you for the correction

11.4. The 7,46 snarling turtle walks calmly on the landing, he certainly knows that falconers only hunt in flight. The female is calm, waiting for an exchange of what will happen. The dove leaves at 8,03 and in a minute the mother leaves and after a while the male sits on the eggs.

20.3. here the eggs are honestly heated

11.3. so they already have three eggs

20.2. at night the male guarded, but the female did not arrive, so at 10,33 he began to liquidate the gift for her himself.14,18 that the female would be so upset in the nest?

17.2. 17,47 both on the nest and with dinner. The male brought, the female liquidates herself.

4.11. camera time 09.56.30.- two falcons. Hello Petro, is this a female Valentine and a male Flashblack? I've only seen one falcon here, probably a female. Thank you for answer.

Hello Marcelo, the first one was a male on the nest, but it's not Flashblack, he has a different color of feathers on his neck and a dark stripe on his beak, it will probably be a new male. Maybe a feathered Lucky who appeared on the nest last year. Shortly after the male, the female Valentine arrived. https://www.illkirch.eu/environnement-cadre-de-vie/davantage-de-biodiversite/journal-2020/

1.9 Female Valentine spent the night in the nest

Camera 1 time cam. 16.59.58 The falcon brought dinner, but haven't even gone yet, just looking out of the booth. He is probably also warm 🙂

3.4 The female slept on the landing at night

2.4 Here the pigeons took over the nest, put some twigs inside, they haven't got an egg yet