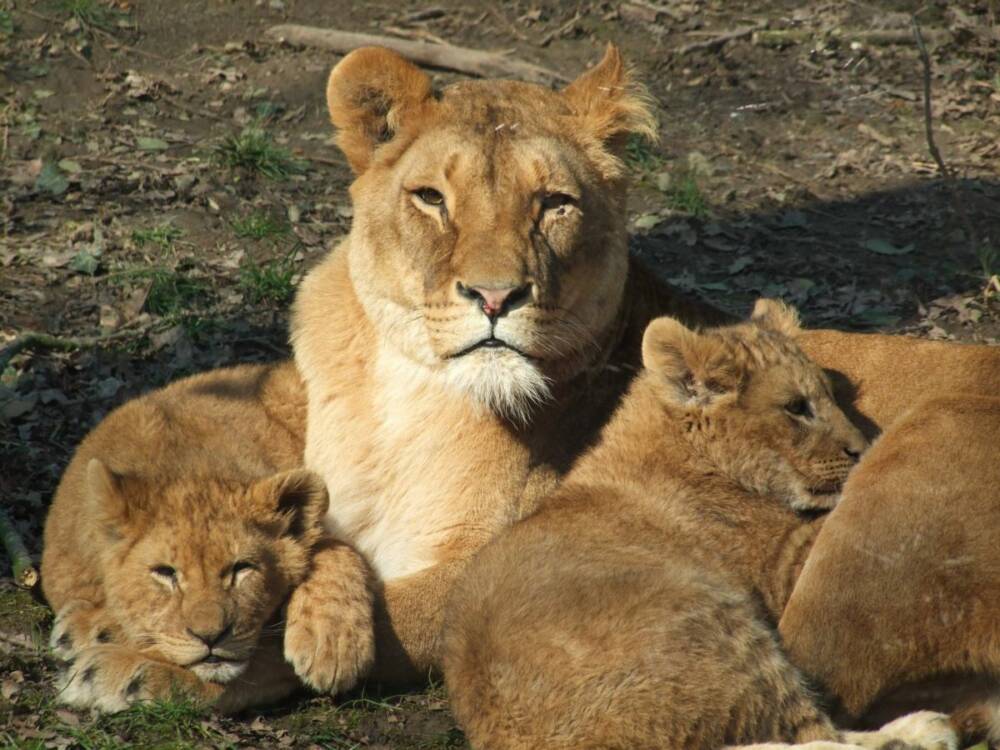 After more than ten years, three lion cubs, one male and two females were born in Port Lympne. The pups were born in the early morning hours of Monday, May 13, for the first time to Adras' parents, an imposing male and his female companion Oudrice. The lion cubs were named - Khari, Binti and Kulinda!
Port Lympne Wildlife Sanctuary near Hythe, Kent, England, covers an area of ​​2,4 km2 and includes a historic mansion and landscaped gardens.
John Aspinall bought the manor with Edwardian estate near Lympne in 1973; the intention was to solve the lack of space in the nearby Howletts Wild Animal Park. It was opened to the public in 1976. Since 1984, animal parks have been owned by a charity (John Aspinalle Foundation, currently run by Damian Aspinall). The collection is known as unorthodox, encouraging close personal relationships between staff and animals and for breeding rare and endangered species. The park now has tigers, lions, leopards, gorillas, bears, giraffes and the largest British herd of black rhinos. The facility also plans to release some animals into the wild.
The rooms are richly decorated and overlook the landscaped gardens and the various enclosures. The latest accommodation options are Lion Hall and Giraffe Manor with 20 bedrooms.

9.2. UPDATE Port Lympne Hotel & Reserve
35 min ·
On Tuesday morning, we noticed that one of the lion cubs was not visible. We believe she came out the bedroom door without his mother noticing. At lower freezing temperatures, it would weaken and succumb very quickly to the elements. It later turned out that she did die during the night.
We are all incredibly annoyed by these events, but the remaining cub appears strong and Oudrika, his mother, has taken him to another shelter, where he is protected.
We expect the mother and cub to return to the bedroom lair soon.

Now only one camera works.

8.2. Failure of all cameras from Port Lympne

congratulations to beautiful babies and keep my fingers crossed that everyone is healthy !!!!!!!

16.1. In the early hours of Saturday morning, we noticed that one of the new cubs was not responding. Khari tried to stimulate the cub, but unfortunately he did not succeed.
We do not want to intervene at this time and remove the young from the lair. Obviously, we want Oudrika to raise her cubs, and we will only enter into it if she leaves the cub or their behavior becomes ruthless, which is not the case.
Our team is currently reviewing all footage. The situation in the lair remains calm and we will continue to monitor it closely. We have decided to share these uncertain beginnings with the world, and this is unfortunately the harsh reality of nature that we so rarely see.

22.12 Added another 3 cameras from the pen, the family sleeps inside

3.10. afternoon siesta, mother with chicks and she yells to it