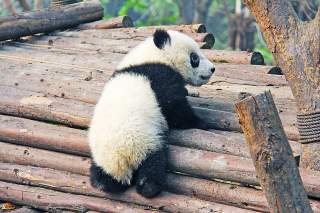 Panda is a mammal now in the family of bears. He lives in the mountainous areas of the central part of the People's Republic of China, such as Sečuan. From the second half of 20. century, the panda has become the national symbol of China and is depicted on Chinese gold coins.
Giant panda is a vulnerable species, the danger increases with the progressive disruption of its natural habitats and very poor birth rates, whether in captivity or in nature. The female is pregnant 97-163 days and gives birth to only one or two small, blind and bare chicks. Of the twins, only one chick survives

how can an ever-growing chick be OVERCOME |