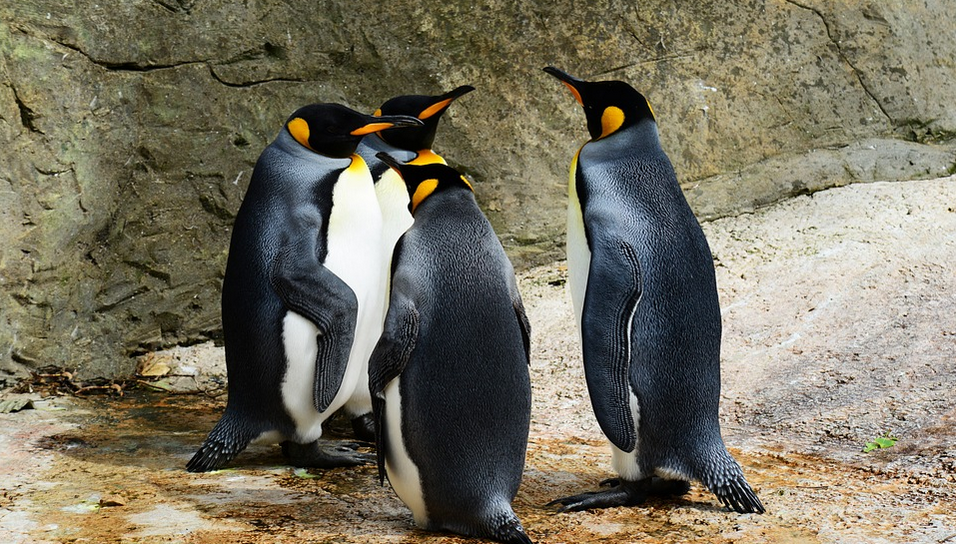 They are medium to large non-flying birds, well adapted to hunting in water. The smallest species, the smallest penguin grows to 40 cm
and weight 1,5-2 kg, on the other hand imperial penguin, the largest species, can be up to 115 cm high at weights up to 46 kg.
The plumage and its quality are very important for penguins, so they are pelting differently than other birds. Feathers do not lose gradually but always once in a time spent on land. Old pens are released
and fall when the new ones protrude over the skin about half a centimeter. New feathers grow during 2-3 weeks (for large species up to 6 weeks); all this time, penguins are hungry because they can not eat food, so they are usually immobile to save energy.
The penguins feed mainly on fish, cephalopods and krill, while on land and lazy their feathers, they are able to starve for a long time (for example, the imperial penguin hungry up to 4 moons).
They are social birds, able to live in vast colonies. They are mostly monogamous and nesting usually returns to the same place. They usually tolerate one to two eggs, exceptionally three. The nest is a maximum extruded denture lined with grass or stones, some species nesting in the clouds, rocks or roots. The two partners alternate with the eggs, and both of them develop on the abdomen a heavily bloodied, bare fold of skin. At first, the females are sitting (except the Imperial penguin,
in which female, due to exhaustion, the eggs are delivered to the males immediately after the plot, and it is incubated for two months until hatching) while the male is at sea, hunted and fattened (several days to weeks), then replaced and sealed again female. The two largest species do not build a nest at all, as the Imperial Penguin nests directly on the snow and the Patagonian penguin on a flat ground. So the eggs lay on their feet and practically constantly wear it on their feet, thus protecting them from cold soil.
The Imperial penguin boy

The youngsters are hatched and populated with dusty feathers. From the beginning one parent watches him and the other hunts, later the youngsters form "nurseries" and hunt both parents. Nursery care is provided either by young non-nursing individuals or by those who have lost their snack. Parents are able to find their cubs in the nursery and feed them only. For nesting species in the cavities, the chicks stay indoors and therefore do not form nurseries. The youngsters go to the sea only when they have complete plumage. Small species grow up in 2-3 years, large even 5-7 (sometimes in 9 years).

Thanks to webcam operators:

7.1. 22 hours of feeding again, two girls offer little fish, those bastions and one girl writes it. Great, thanks Petra! I prevented it from cuddling I managed!

Emperor penguin - I added camera 2, there are penguins with cubs

New camera - there are a lot of emperor penguins here

Thanks to Petro, a beautiful spectacle