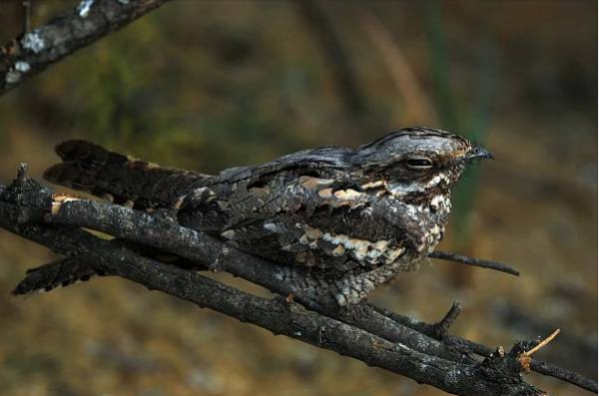 Forest Nightjar is an Estonian bird of the year 2019. The size of the Estonian population is estimated at 5000-10 000 nesting pairs.
Nesting camera

Eagle Club (Kotkaklubi) and BirdLife Estonia (Eesti Ornitloogiaühing) installed a webcam on the nest in the first days of June. The nest is located on Hiiumaa - the second largest island in Estonia. Renno found a nest in the last week of May, when there was one egg. By the time the camera was installed, there were already two eggs, which is the regular size of a clutch. The incubation period is 17-21 days and we expect the chickens to hatch a week before the summer solstice.
Remote controlled camera, installed a few meters from the nest and equipped with an infrared light source, so we can watch the nest at night. The camera was installed by Renno Nellis and Urmas Sellis from Eagle Club and Omar Neiland from Beta Group OÜ. The server space is provided by EENet and the forum is managed by Looduskalender. The project is supported by the Environmental Investment Center.

3.7. the little ones are growing up here

25.6. it
their coloring still keeps me stub or family. They're still moving.

24.6. 2,43 Mrs. Lelková on the hunt again, the little ones are hairy dark balls, the mum watches them during the day

17.6. 12,27 nest empty, feeding on the right side of the screen outside it, the second chick I can not see, the egg also not

12.6. so it merges with the environment that looks like a piece of stump, otherwise great, I've never seen it