Common Starling - webcam from the booth 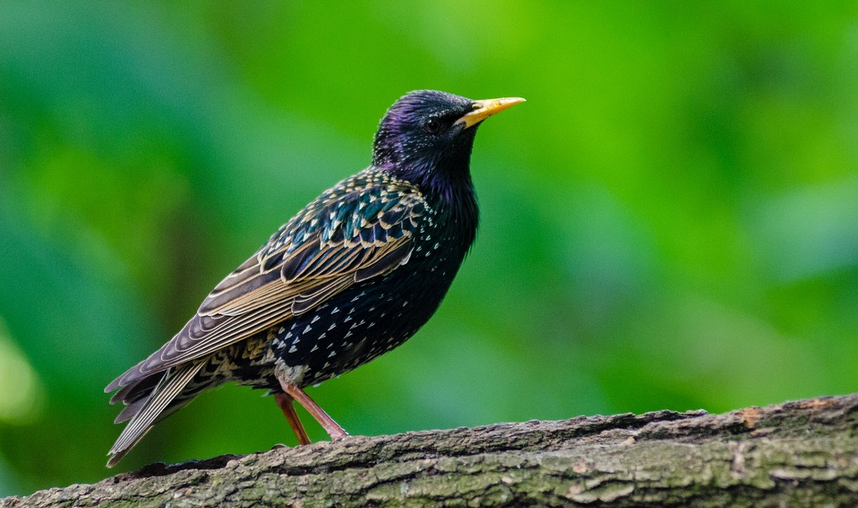 The common starling is slightly smaller than the blackbird. It grows to a length of 19–22 cm, measures 37–42 cm in the wingspan and weighs 60–90 g. The beak is yellow in summer and dark in winter, the legs brown-pink. It flies straight and fast, in flight it has a typical silhouette with pointed wings and a short tail.
Both sexes are similar, the male differs in the summer with a spotless chest and a blue-gray root of the lower jaw of the beak (yellow in the female). The young bird is all gray-brown with a lighter throat. He receives adult-like plumage at the end of July to September, but his brown feathers remain on his head, so he is easy to recognize.
It nests colonially and individually. It is mostly monogamous, but especially in places with a larger number of nests, polygyny also commonly occurs. The most common in such cases is nesting with 2 females, but in exceptional cases, males can nest with up to 5 females. The nest is in the hollow of a tree, less often in a booth or building. It consists of twigs, bark, roots and straw, the interior is lined with fine stalks, hair and feathers.
In some parts of the area it nests up to 3 times, in Central Europe usually 1x and sometimes twice a year from April to June. The clutch counts 2–4 (6–2) slightly shiny, one-color light blue eggs measuring 9 x 29,4 mm. They are tolerated daily. Intraspecific nest parasitism is common in some areas, and it has been found that females are able to recognize parasitic eggs to some extent and throw them out of the nest. The incubation starts from the laying of the last egg and lasts 21,1-12 days, both birds are sitting. The chicks are fed by both parents and leave the nest at the age of 13-16 days. After nesting, they congregate in flocks, which spend the night in the reeds and treetops. Hundreds of thousands of birds can be regularly observed at the largest shelters. They reach sexual maturity at the end of the first year of life.

Thank you for transferring from the starling booth. During my childhood, we used to have two starling booths in the garden in Šumava. Grandpa placed one of them in the crown of the cherry, probably so that the starlings would not be far from the fruit. At the time of nesting, the cries of young were heard, of course, as a child, I wondered what was going on inside, but the booths were too high and the webcams were not yet.

12.6. it's shouting while feeding, so that everyone gets, they have to draw attention to themselves and other than shouting and open beak it is not possible